Last Thursday night we had planned to sail to Santa Cruz Island so we could enjoy a long weekend together in solitude but that plan was foiled by the Santa Ana winds. However, the winds weren’t the worst of our problems. 2 wild fires started up way too close to us, just 30 minutes after I got home from visiting a client in L.A. Within an hour, the sky  above our slip in Oxnard was black and the sun was glowing orange through the smoke, tinting everything with an apocalypse like hue. 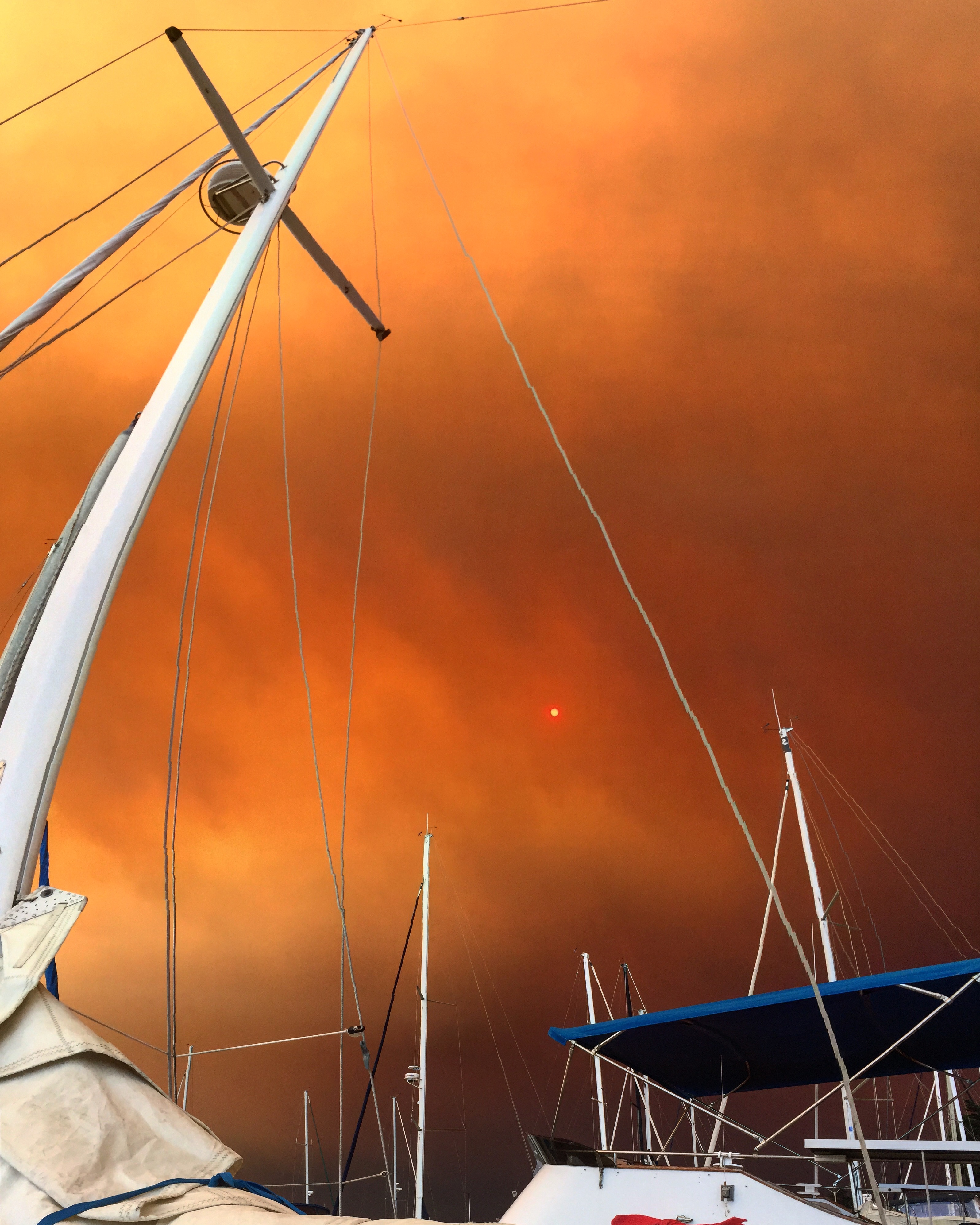 Here is what the smoke looked like from our slip. Air quality was BAD.

We were initially bummed that we couldn’t sail to the Island when we wanted, but that’s just sailing. We decided to wait another night and try to head out the following day, however when Friday rolled around we woke up and the wind was still howling and our decks were starting to get ashy, which is a sure sign to get out. Unfortunately, all the highways in and out were closed so we had no choice but to stay put. We woke up early Saturday morning (despite trying out hardest to sleep in) and a very obvious idea popped into our heads- better late than never I suppose. As badly as we wanted to sail out to Santa Cruz, all weather predictions were calling for another round of Santa Ana Winds starting Sunday and ending Monday morning and we didn’t want to get caught up in that while out at anchor so Chris and I jumped out of bed, turned on the percolator and set course for Santa Barbara which was a refuge from the smoke and power outages caused by the Hill Fire and the Woolsey Fire

As I mentioned, the wind was not in our favor as it was coming directly at us, so instead of sailing north we motored, which was fine since there was virtually no swell. While Chris was at helm, I fixed up huevos rancheros for breakfast using “soyrizo” a vegetarian option to chorizo since we don’t usually keep meat aboard Avocet. We enjoyed our coffee and breakfast out in the cockpit while keeping our eyes peeled for crab pots (there seemed to be more than usual floating about) and marine life. Once I regained cell service I reached out to our family and followers letting them know our plan and that we are safe from the fires. With that said, we want to thank everyone who reached out to us offering their prayers, kind words and support. Although we are okay, there are many people down here that weren’t as luck so we urge you to donate what you can! 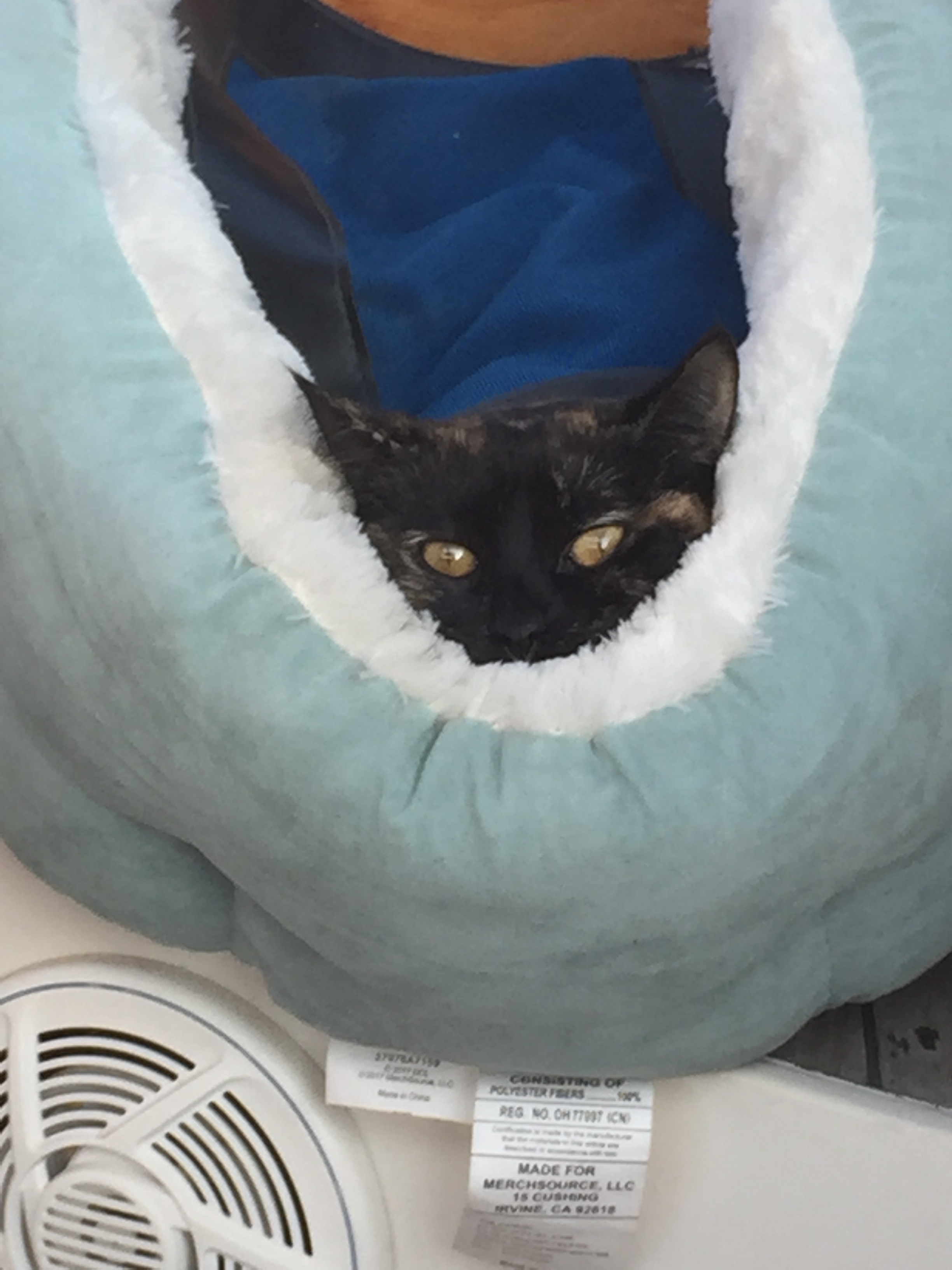 Not Really Stoked On The Whole "sailing" Thing 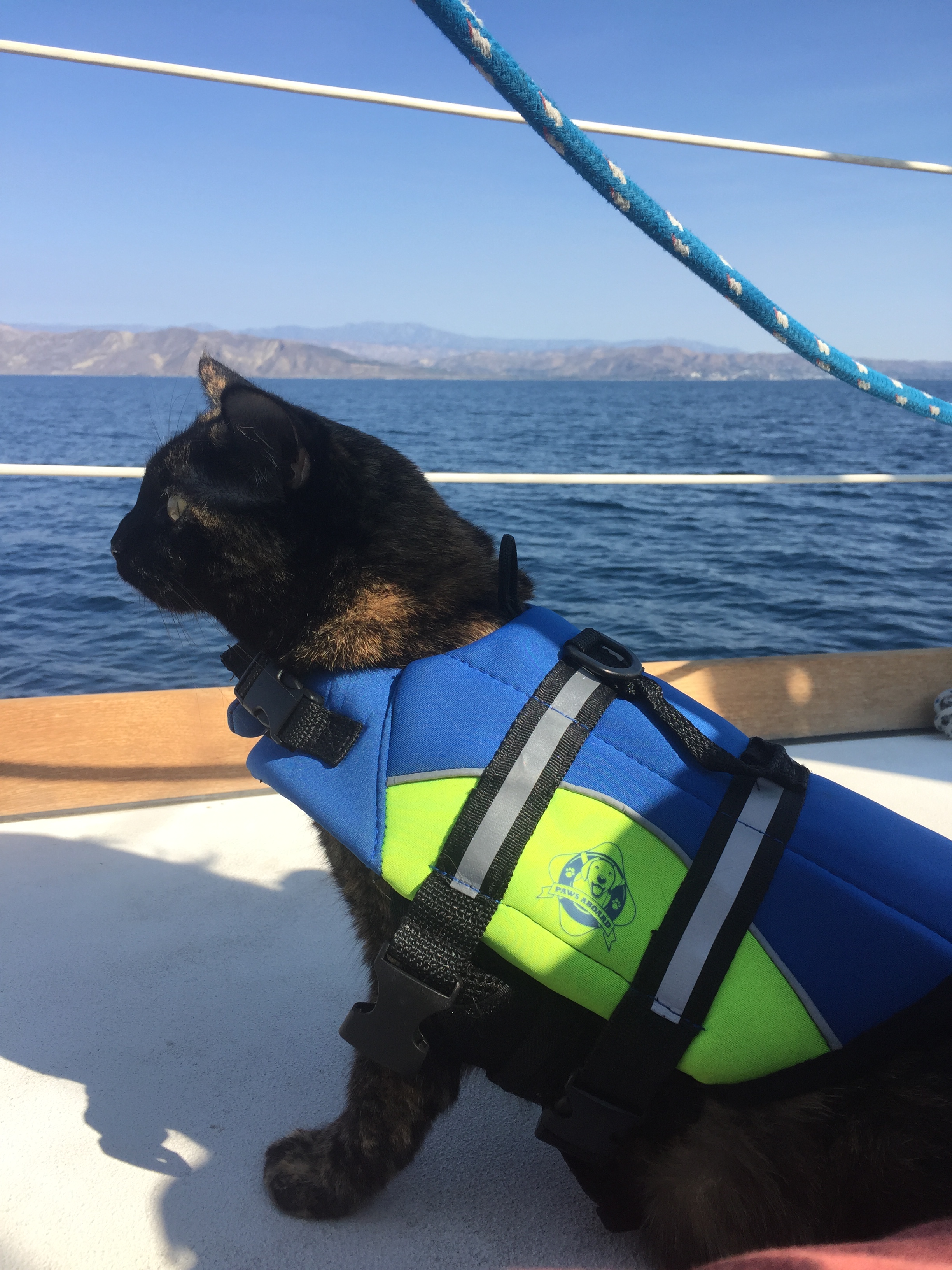 Getting A Little Adventurous

After 4 hours on the water the sound of the engine became a lullaby for Skipper Chris, so he handed the captains hat to me and I kept watch up above while I typed out the beginning of this very blog. We finally made it to the Santa Barbara Harbor at 2:30. We decided to stay in the harbor since if we were at anchor we would have to be on high alert for the Santa Ana winds rolling through as well as the swell. Chris’s brother Jon has spent many times at the Santa Barbara Harbor aboard Tara (their first boat) as well as SV Prism so we knew what to expect for the most part. The marina runs on a first come first serve basis so we were stoked that they had a slip available for Avocet. 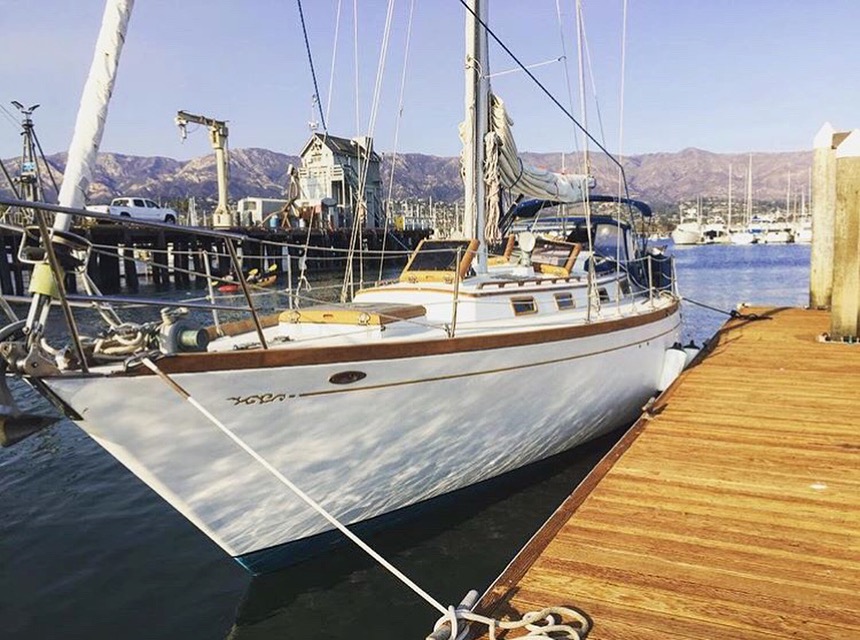 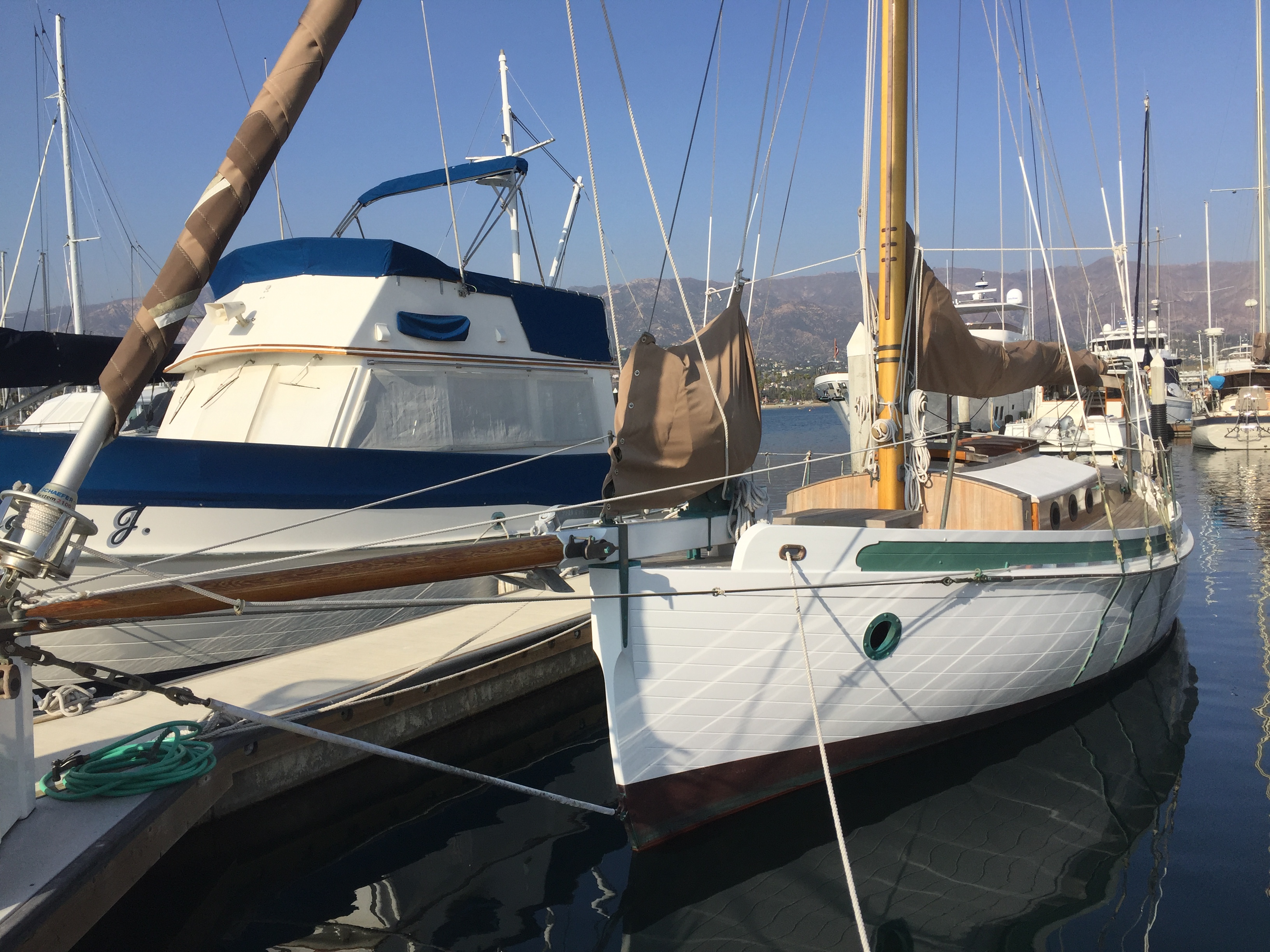 Her name was Morning Song, and she is truly gorgeous.

Once we settled in our transient slip we walked the docks to check out what this harbor had to offer. While investigating the scene we spotted 6 Cheoy Lee’s! We were also invited aboard a beautiful Bristol Channel Cutter that the owner had hand built. It took him 25 years and the outcome was well worth his time. Chris has an infatuation with BCC’s because they are a Lyle Hess design that is all teak and sails like a dream.

We parted ways with our new friends and made our way back to Avocet where I began dinner while Chris re-stowed the boat and did other things here and there. After dinner we stuck to our original “island plan activity” which was to set up the projector in the cockpit and watch a movie outside. It worked perfectly! Movie of choice was the Blues Brothers, a true classic. 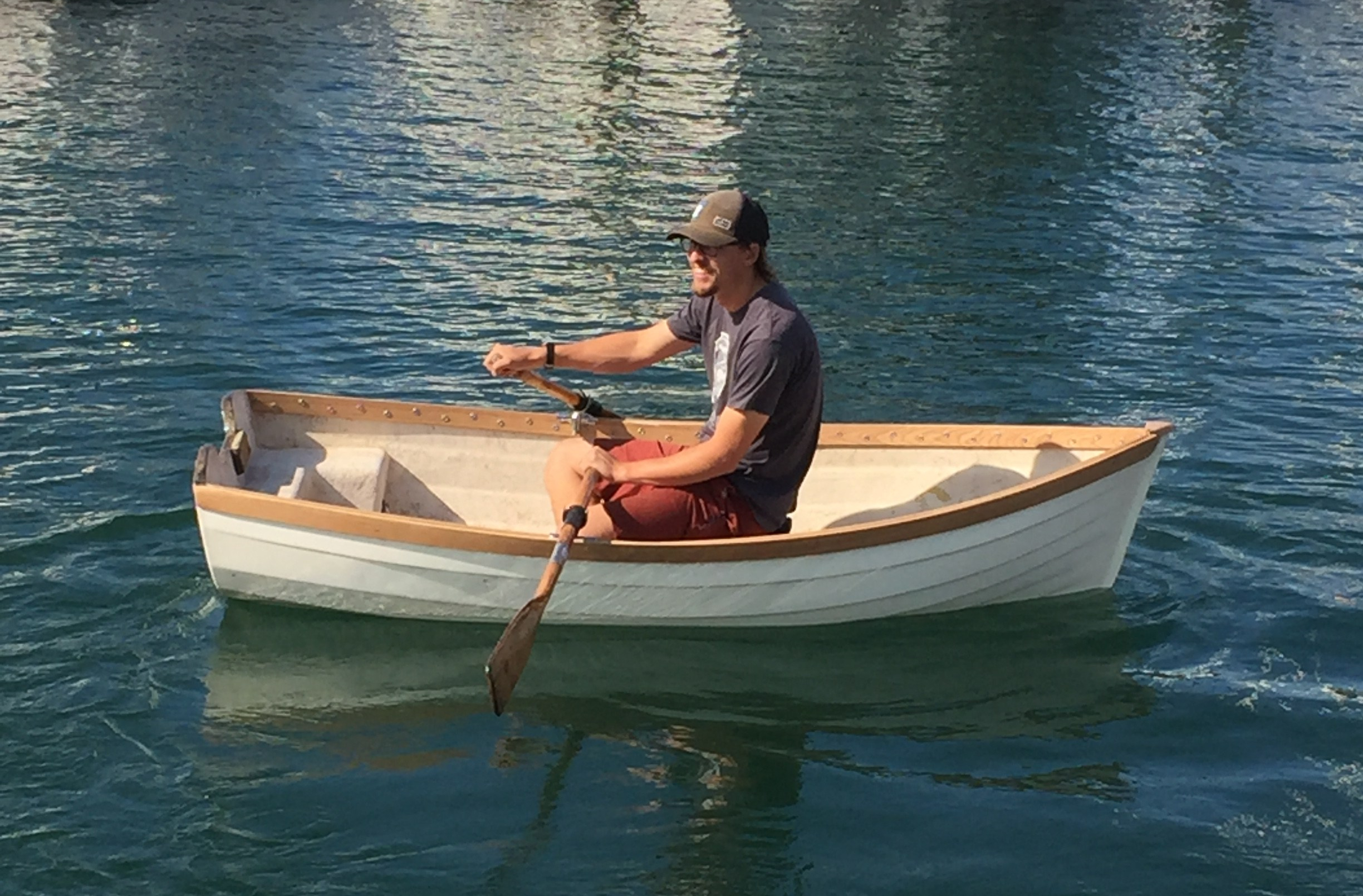 On Sunday morning we were up bright and early, ready to get out and explore. After breakfast and coffee we launched the dinghy off our davits and explored the harbor by paddle- just ‘cuz we could! After about an hour of giggles and splashing we finally got the hang of rowing together, and as it turns out we were actually pretty fast! We rowed back to Avocet and got ready for a day spent walking around downtown. Honestly, downtown Santa Barbara was one of the most beautiful towns we have ever seen! It was so floral -seriously- there was greenery everywhere and everything was so clean. We walked all along the harbor, then the pier where we stumbled across a candy shop that we of course had to stop in and sample. From there, we walked all up State street and then back to the harbor where a few of our Instagram followers nudged us to try the Breakwater Grill for lunch, so good!

That night we enjoyed the sunset and walked the beach at sundown, setting up the camera for a time lapse of the stars. We counted 3 shooting stars that night, can you guess what we wished for? We walked along the breakwater and listened to the waves crash against the wall, and talked about future sailing plans. After an hour of talking, star gazing, and freezing our butts off we wandered back to Avocet and got ready for our sail home in the morning. 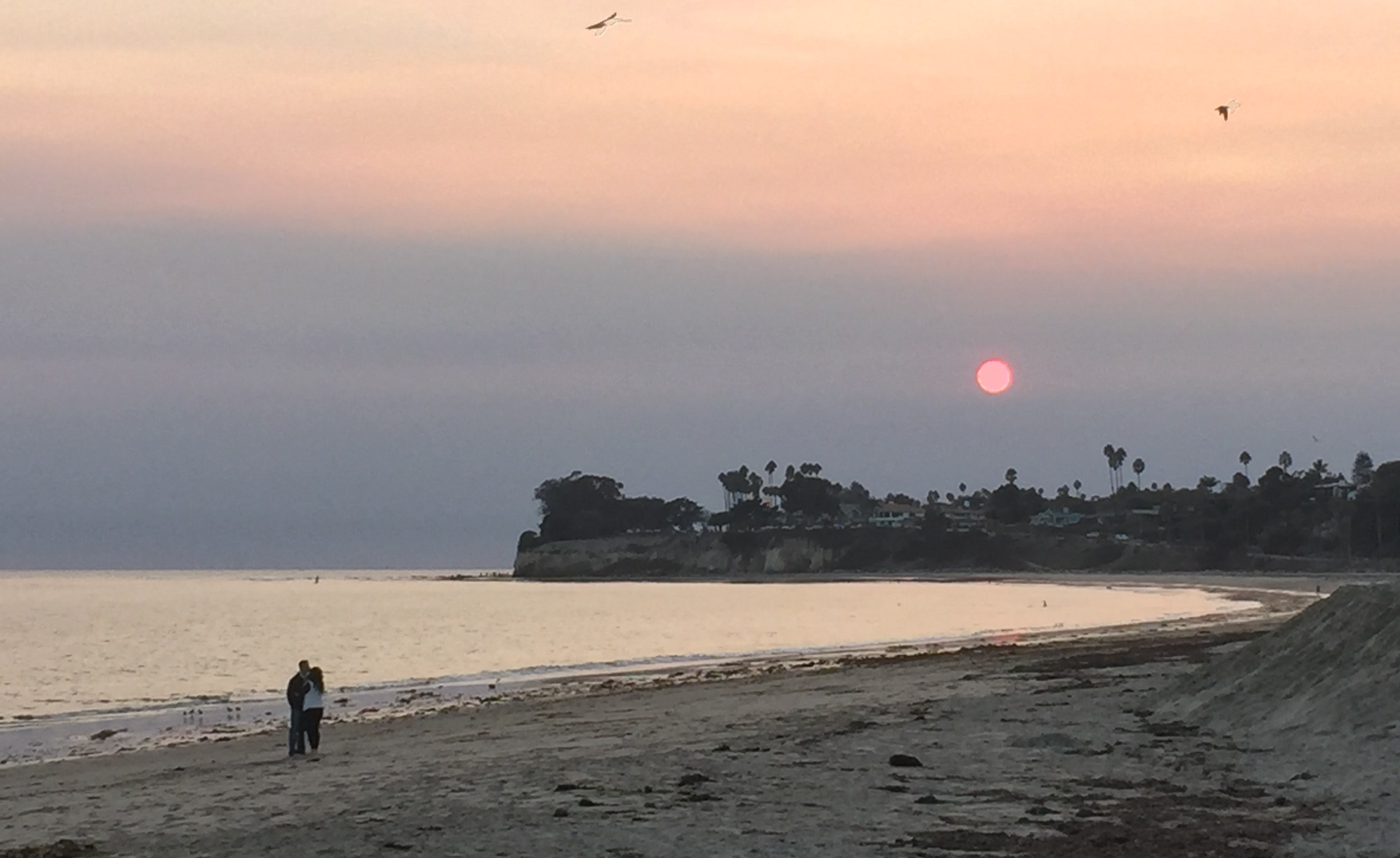 Pretty sunset! Oh yah, see that couple? They got engaged 4 minutes after I snapped this shot. Congrats strangers!

Our “storm jib” (photo taken after we docked, airing out the sails)

To describe Monday’s sail home in one word: Chaos, or if your British you may refer to it as “sporty”… but nonetheless it was insane. All was fine until we hit our half way mark, thats when the Santa Ana’s hit us with gusts up to 40 knots. Luckily, Skipper Chris was well prepared for this instance, so prior to sailing he had reefed our main and replaced our genoa with a small staysail, using it as a storm sail since it is more maneuverable and doesn’t make us rely on our ferler (since they can be known to fail). It was honestly a comedic sight, watching us get drenched with spray from over the bow and keeping our bimini from blowing away- oh ya, did I mention our freaking bimini almost flew away!? Let me paint the picture for you: Chris ran to the bow (fully harnessed with a lifejacket) to save our anchor from letting go after it had shook free from the tension on our gypsy that keeps the chain and anchor tight, as well as our bridle that splits the load with our gypsy (which also acts as a failsafe if our Gypsy lets go). So while Chris was getting a full bath up on the bow (a full wave broke on him, kinda funny, but kinda not) I was at the helm, dealing with heavy random gusts and trying to keep us on course while bashing through 6 ft waves. On top of all that, the bimini pins on the port side shook loose so it nearly flew away! I had the bimini in my left hand, the wheel in my right and my eyes on the bow to make sure Chris didn’t go overboard- it was a real kerfuffle. Chris finally made it back to the cockpit and relieved me from my duties as temporary captain while also securing the bemini back in place. After a few more good sprays to the face we made it through our harbor’s break water and back to our slip, after 2 hilarious attempts to dock (shout out to our neighbor for helping us with the lines)! When we were all tied off, we just looked at each other with exhausted eyes and messy wind blown hair and both said “we did it”. In the future, if there is ANY warning of Santa Ana Winds,  you can find us cuddled up in our slip enjoying Netflix and hot chocolate.

Thanks for reading! We can’t wait to get back and explore everything that Santa Barbara has to offer. Cheers, ~ SV Avocet 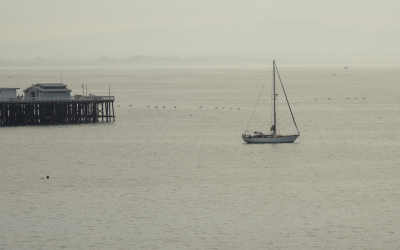 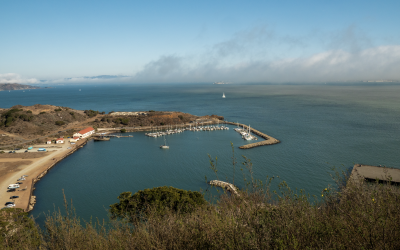 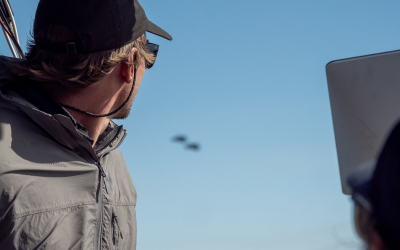 Planes, Pals and Memories “It was fun while it lasted,” Chris said through a half smile. I was at the helm guiding us...