Cleopatra Elouise Neely (respectively known as Cleo) is our 6 year old tortie cat who has become the best deck paw and fur baby that we could have ever asked for. We get a lot of questions about our feline crew member and decided to write a blog about how she became a part of our lives, her transition to boat life, and all the details in between. So how did we end up with a perfect cat like Cleo? Well, funny story: she was actually supposed to be a fish.

Once upon a time when Chris and I lived in Tahoe, I had a coupon for a beta fish that came with an aquaponic garden my dad gave me. The closest PetsMart was in Reno, so we drove down the mountain to retrieve my fish. Once we arrived, I went directly to the back of the store, completely surpassing the fish isle, because there were cats for adoption and who the heck doesn’t love saying hi to animals?! I immediately called Chris over to check out the cute cats behind the class and thats when he surprised me and said “we are getting that cat”. Now I say surprised because 1. we were not allowed to have pets in our apartment and 2. A cat?! We were there for a fish! After trying to convince Chris it was a bad idea, I put my finger up to the glass, saying “hi” to the little fur ball and what did she do? She put her little bean-toed-paw to my finger and gave me the biggest “take me home” eyes. That little angel became our Cleo. On the way home, she snuggled in Chris’s lap when we were trying to think of a new name for her. Her papers read “Nina” but that name didn’t feel right. We were listening to the Lumineers on our dark drive up the mountain, which is when I suggested “what about Cleopatra, Cleo for short?” after our favorite Lumineers album. Her middle name is also after a Lumineers song. She spent 1.5 years in Tahoe with us, completely undetected in our “no pets allowed” apartment and that was the first time we became a real family. 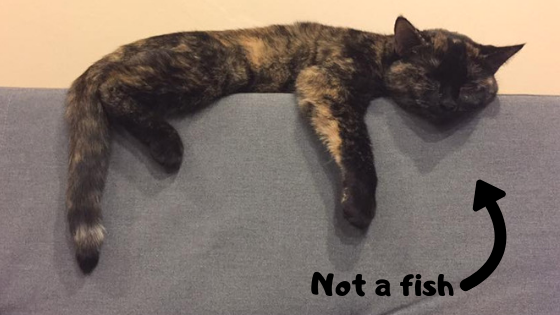 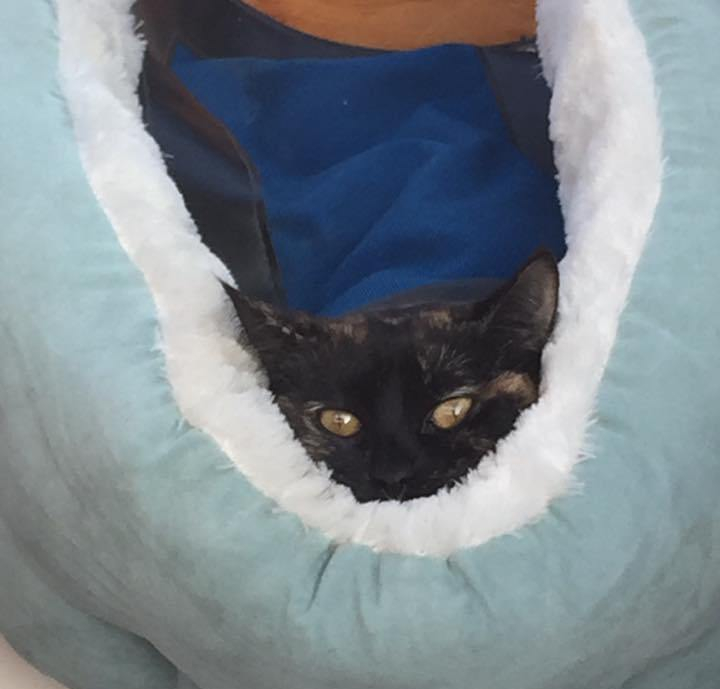 Not really enjoying the whole sailing thing yet…

Fast forward to boat life: we moved onto Avocet in June shortly after our wedding. It was the first time Cleo had been aboard her new home and it didn’t take long for her to adapt, especially when she realized she was allowed outside after always being an indoor cat. We are still surprised because Cleo has no interest in being off the boat, every time we take her out on the dock on leash, she runs back to the boat and sits in the cockpit (her spot). When we took her sailing the first time, it was definitely rough. Cleo got sea sick and until recently would always puke while under sail. We have since learned that when we keep her in the cockpit with us, or covered in a dark corner she is much more comfortable. Another tip I learned from a friend is coconut oil and frankincense on the paws prevents sea sickness. You will all be very happy to hear that Cleo is getting more and more brave every time we set sail, so don’t worry! She is well taken care of. 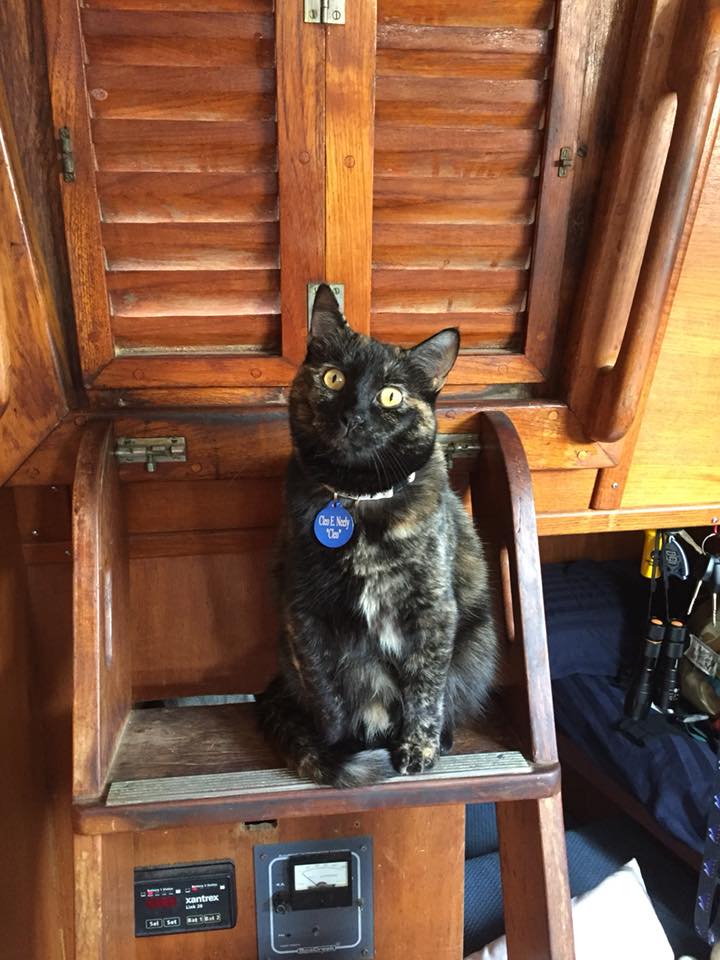 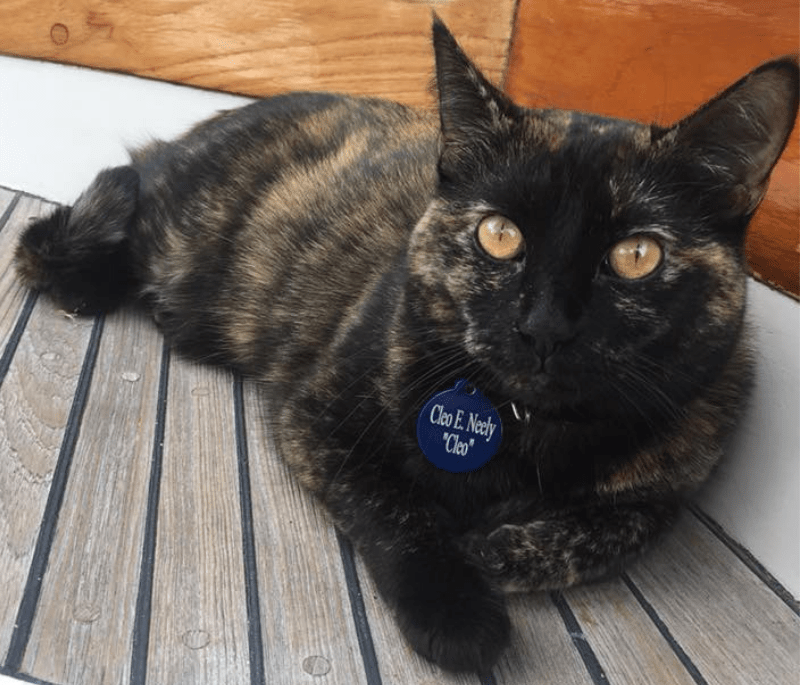 I Can't Tell If This Is The Look Of Admiration Or Judgement...

One major issue we encountered on the transition was cat litter, which is actually a question we get asked a lot. Traditional litter lasted no more than 2 weeks aboard since the litter would end up in the bilge- making Chris very, very mad. Chris then sat down and spent hours doing research on litter alternatives that were mess free, odor free, and environmentally friendly. We narrowed down the search to one system that has been perfect for this life style that doesn’t use cat litter at all! This wonder system is the Purina Tidy Cats Breeze System which you can pic up at any pet store or (even better) Amazon. This lovely litter box lives underneath the V berth bed and has no odors whatsoever. We are extremely impressed by this litter system and highly recommend it to any tiny-home-livers or people looking for a traditional litter alternative. 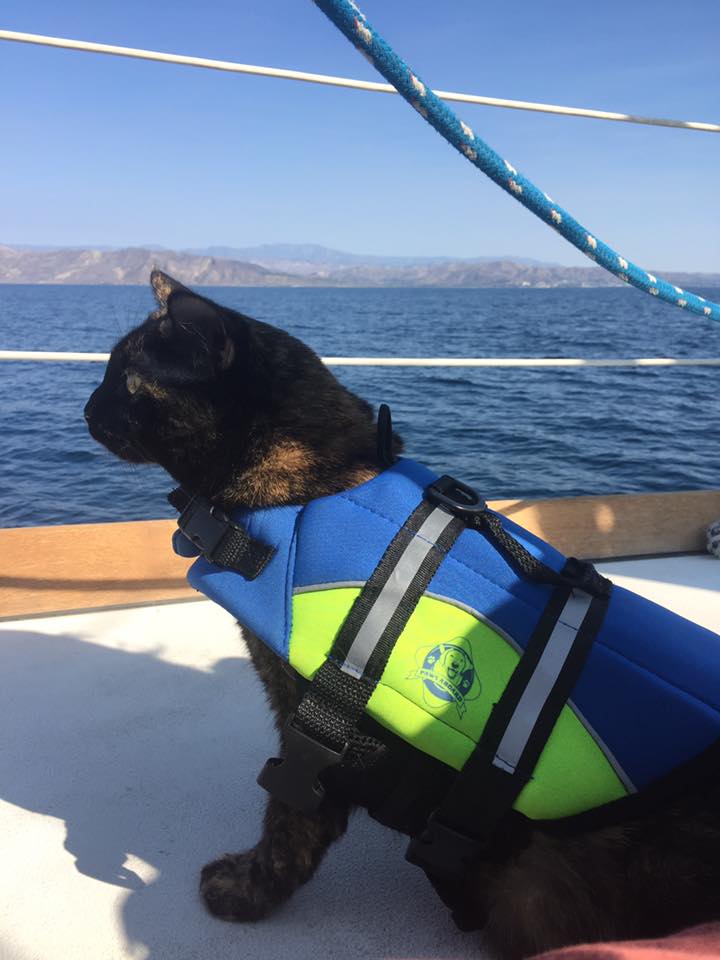 While on the topic of FAQ’s another hot question we get is about Cleo’s life jacket. Yes, we make our deck paw wear a life jacket just like we do because she is part of our family! Unfortunately, there are no life jackets exclusively for cats, so I got her an XS dog life jacket which works just the same. The life jacket isn’t just for safety, it also works as an anxiety wrap that seems to help Cleo with her stress when we are under sail.

Believe it or not, people have asked if we are planning on circumnavigating with Cleo. Of course we are! As mentioned before, she is part of our family and we are excited to sail the world with her. The process of preparing to travel with a cat is not as crazy as it may seem, you just need to stop by your local vet and check off all the boxes (vaccines, passport, learning Pet CPR and emergency medicine). It’s all the things you would do for yourself or your human children, so why not do it for your pets too? The one downside is that some countries have a longer incubation period, but is that really a downside? “Oh shoot I have to spend x amount of days somewhere cool while I sail around the world on my boat! Whatever will I do?”

Cleo has made every spot imaginable on Avocet her own, even surprising us with a few such as curling up on the book shelf every night while we watch Netflix. She spends a lot of her day sleeping in her various spots but we try to make sure she stays as active as possible by playing with her and even doing some training routines. Fun fact: you CAN train a cat! Cleo knows how to sit, high five and hopefully she will learn some more soon. She is becoming more adventurous and joins us while we are outside working but never jumps off the boat. As happy as we are that she has no interest in leaving the boat, we have put her on the dock a few times to see if she has any curiosities about the world beyond our bow but so far she just sticks to us like glue or runs immediately back on deck and watches us from the edge of the toe rail. 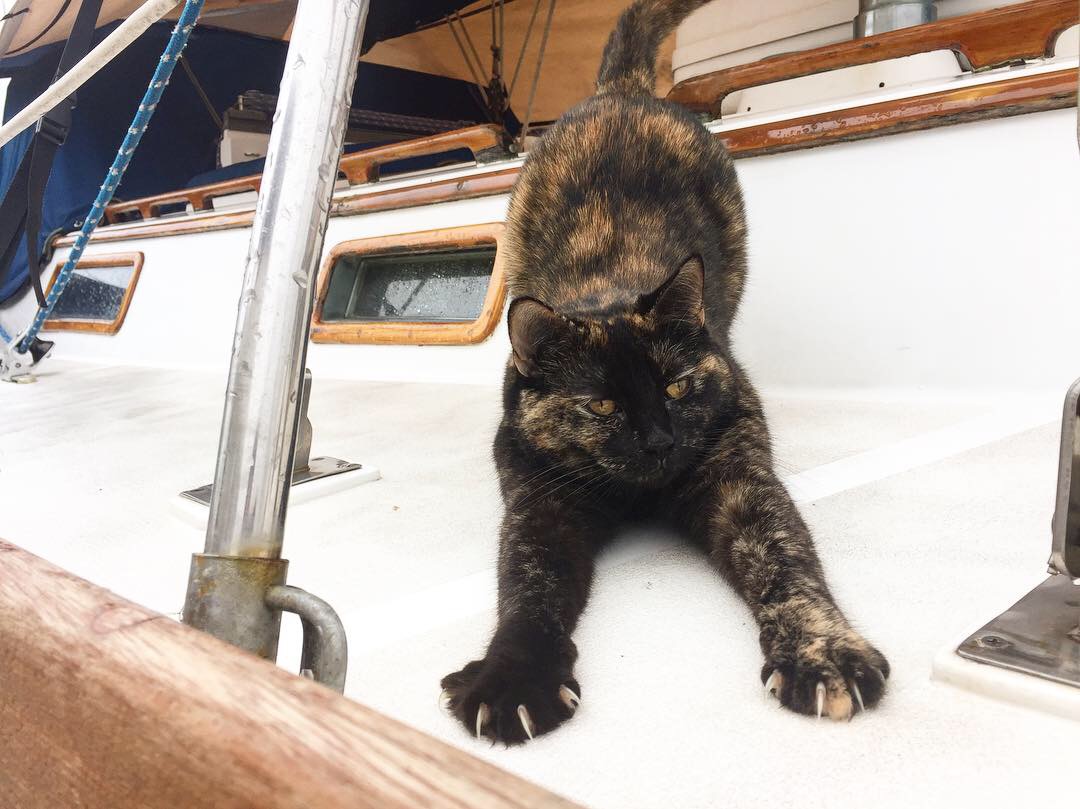 Supervising As Projects On The Dock 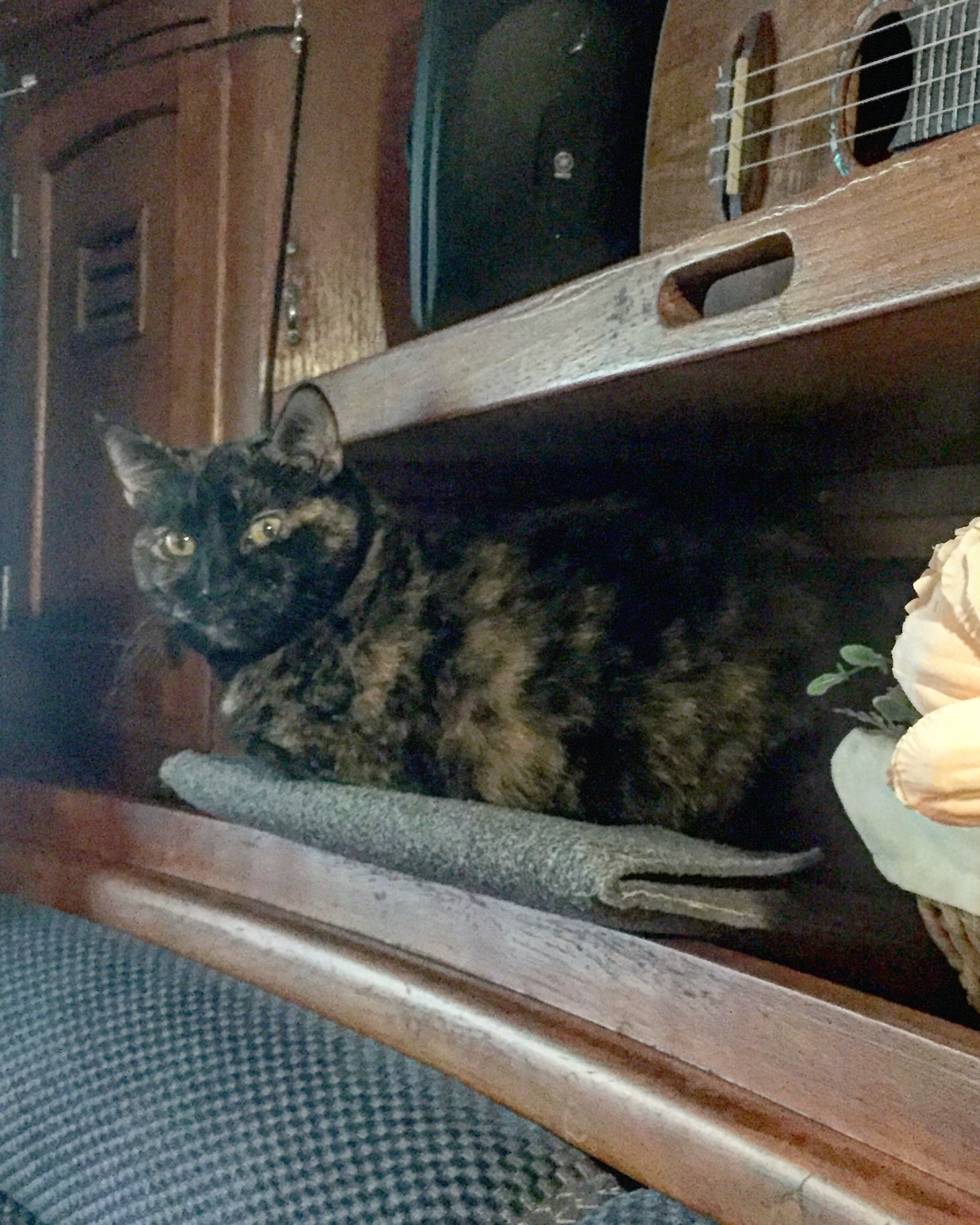 Apparently This Is Her New Favorite Spot

Tortie cats are known for having attitude (rightfully dubbed “tortittude”) and Cleo is full of it. Her personality is truly one of a kind and we feel very thankful to have a cat like her. She is irreplaceable and will always be our fur-st child. Thank you all for taking interest in our deck paw! It was fun to write this out and I hope you enjoy reading it. We promise that you will see much more of Cleo in upcoming videos so stay tuned!  Cheers, Chris, Marissa and Cleo

Oh and P.S. I never did get that fish. 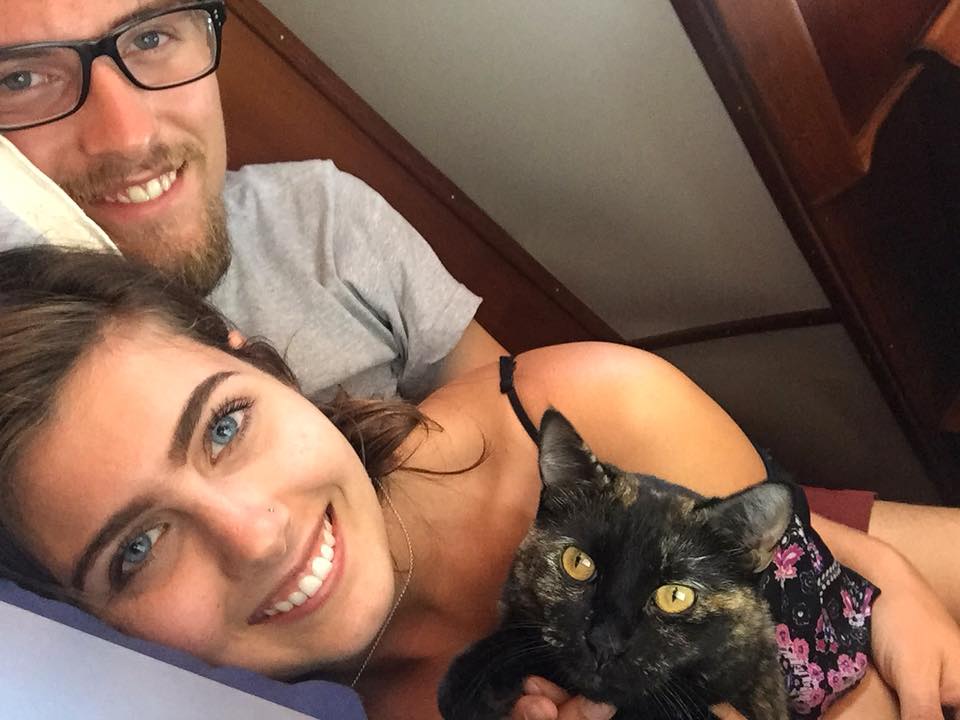 Missing the movement beneath the keel… even thou

What a week! It took 2 days to sand the failing pa

Bye bye for now, mast! Enjoy your facelift at @der

Before Avocet, there was GERONIMO!!!! However, she

Wishing for a little more of this in the near-ish

HTTP Error. Unable to connect to the Instagram API. Feed will not update. 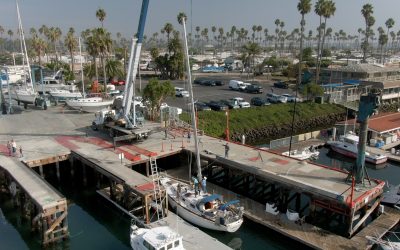 Since 2018 Chris and I have worked hard to reinforce the structural integrity of our boat while also adding our own... 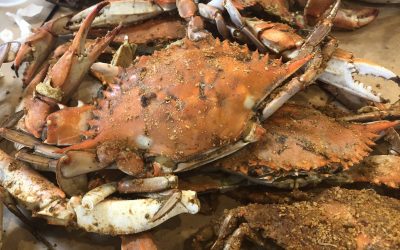 I clutched my carry on bag as I scooted into my window seat, not quite big enough to call comfortable, but not small... 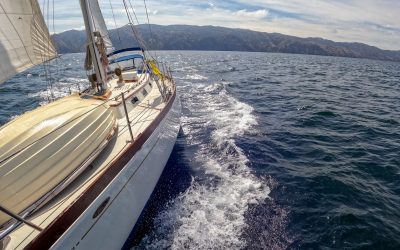 I ran down the dock under the cover of the warm afternoon light, eager to trade my work attire for bare feet and...