Fear and Loathing of California

“We were somewhere around Barstow on the edge of the desert when the drugs began to take hold” – Hunter S. Thompson

We were about to Barstow when the coffee kicked in. It was 10:00 am on Friday the 13th, and in true Neely fashion we were a few hours behind schedule purely because our bed was warm and the outside was not.

About 3 days after our return from Santa Cruz Island, Chris decided to stop working around small projects and just rip into them all at once. It started with cleaning our internal fiberglass water tanks that were in dire need of grinding, blister popping and installing inspection ports. From there Chris decided to replace our forward lower chainplates, the final 2 chainplates to be replaced. It’s a good thing he did too because they crumbled in his hands as he tried to remove them. As if those projects weren’t enough to keep us busy, we decided to address our inefficient fridge and rip out the insulation while also preparing to replace our countertop with granite. To top it all off, Chris thought it would be best to also varnish the interior. Our “vacation” was over, and it was back to boatwork. 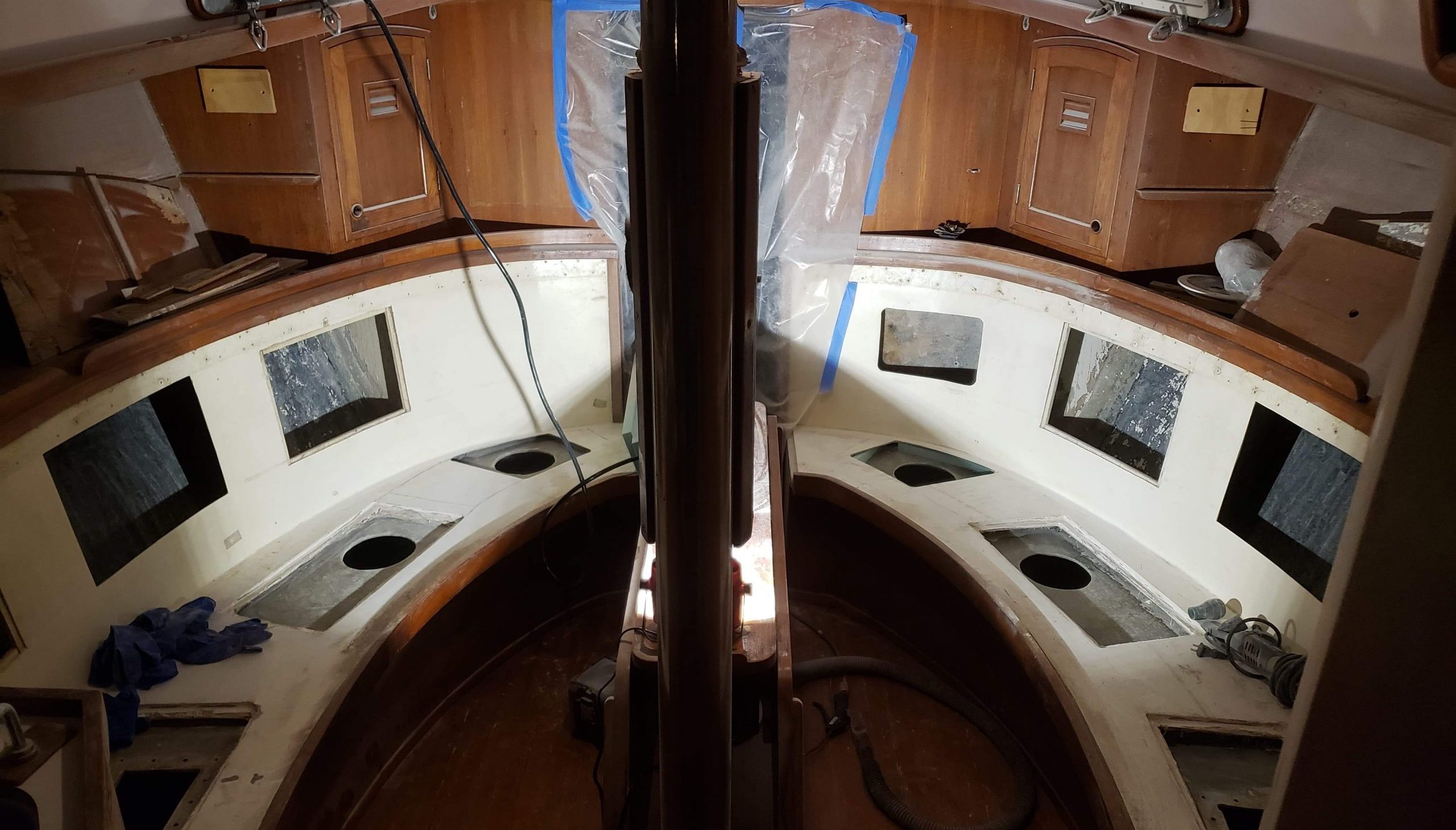 California has slowly been outlawing the sale of products with high VOC’s since the 1980’s. Year after year we have watched our favorite products disappear from shelves to never be stocked again, pushing us to be creative in how we acquire our tried and true materials. As we neared the rebuild stage of our interior projects, the need for beloved outlawed products became necessary, and they were nowhere to be found. Luckily, our neighboring state Nevada still sold what we sought after, so we decided to pay the silver state a visit with a full shopping list in hand.

Sagebrush began to dominate the landscape, painting a picturesque scene framed by the truck’s windshield. Many people think the desert is a dry, hot place and most of the time they are right. However, in the winter months the desert is a frigid bone chilling cold that bites into exposed skin. Prior to boat ownership, Chris and I lived in Nevada, in the small town of Incline Village located on the north shore of Lake Tahoe, about 30 minutes west of Reno. It was there we learned to live together and hatched the idea of buying a boat after college graduation. Seeing the Nevada landscape always reminds me of that important point in time, and makes me grateful for how far we have come.

We arrived at our hotel around 3:00 to check in and unpack our overnight bags. Since we were still in a pandemic, I was careful when researching accommodations and found a hotel that was up to my standards, affordable and clean. Chris has been banned from booking hotels since his last attempt landed us in the Rodeway Inn, Mission Bay San Diego, for the Victory 21 Regatta back in 2016 or so. It was cheap, but you get what you pay for. 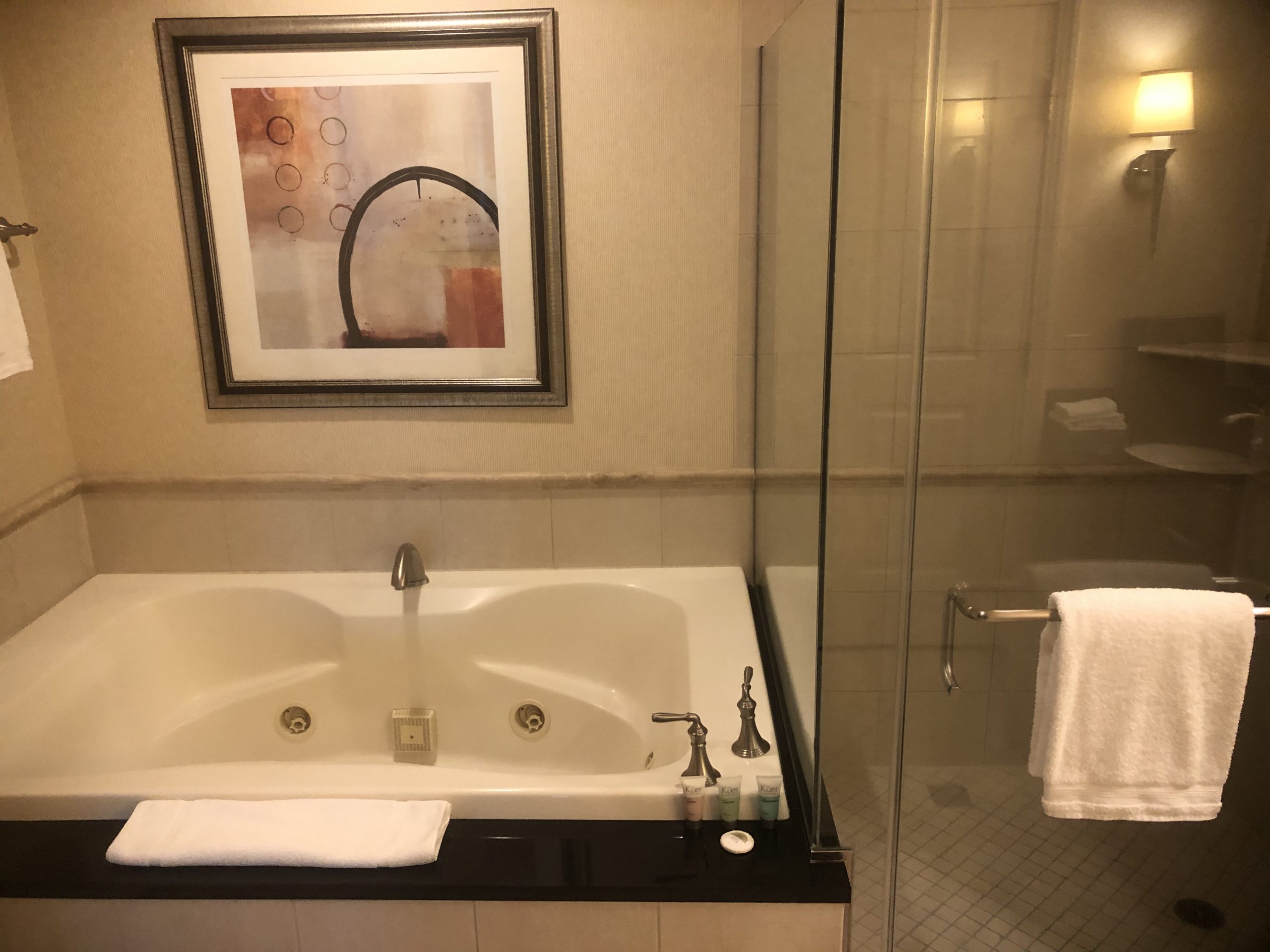 Our Las Vegas room was large with a kitchenette, jacuzzi tub, and queen size bed that swallowed me in its fluffy layers upon landing. We were impressed with the cleanliness of the room and after a quick sweep for hidden cameras and two way mirrors (I am my fathers daughter) we changed and made our way to the strip for dinner, since no one would deliver to our room.

Walking on the strip always reminds me of my first time in Vegas. I was barely 19, on a business trip with my friends Megan and Lena to compete in the Tri-state collegiate business plan competition. Although our ironclad plan had lost to chicken farmers (it was devastating) we took advantage of our most-expense-paid trip and took to the clubs dancing the night away. This Vegas trip was much different, as passerbys kept a wide beam, masked up and avoiding contact as much as possible.

After wandering aimlessly trying to decide on what to eat, we finally settled on Italian food (always a good choice) and sat ourselves in Eataly for a simple (and expensive) pizza and ravioli dinner complete with cannolis. With full bellies and tired feet we walked back to our room and drew a bath… because there was no way I was going to pass up the opportunity to sit in a jacuzzi tub filled with warm, freshwater… available at the turn of a tap, and press of a button. Land life amazes me. 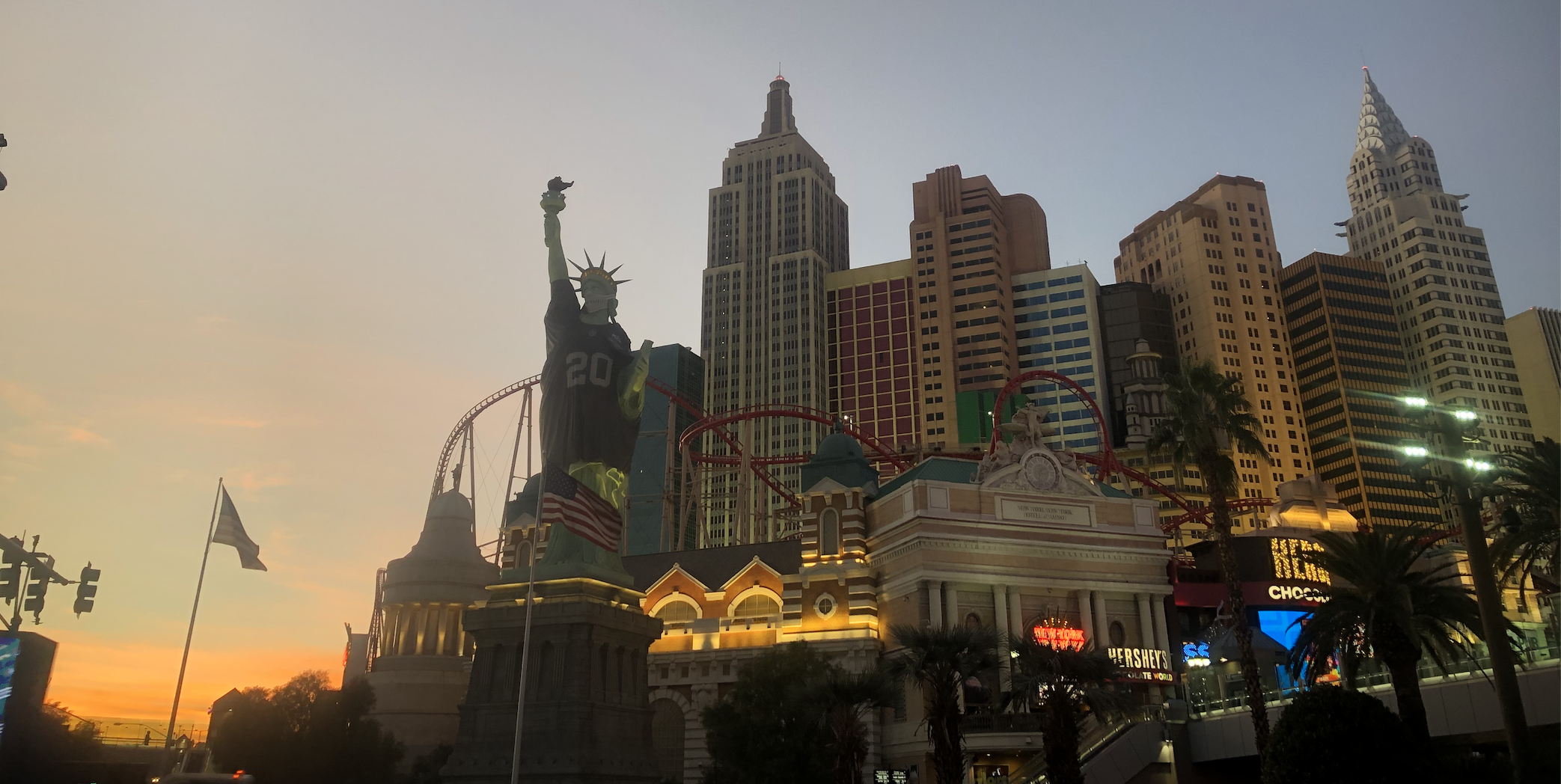 We slept hard that night, waking up to the sun shining over the mountain range and illuminating the Nevada landscape. It was shopping day and we were ready to get what we came for! But first, breakfast. I’m sure we could have found another unique (and expensive) breakfast spot but instead we opted for the local Denny’s, knowing Chris’s father, Van, was smiling down on us. Chris has fond memories of Denny’s breakfasts with his dad, so to keep his memory alive we sat down for a cup of coffee and stack of pancakes, that were delivered to our table only moments after ordering then proceeded to talk about boat projects.

Tile Clad is a two part epoxy paint that is incredibly tough and mold resistant, making it perfect for the marine atmosphere. Unfortunately, it falls on California’s banned list making it unobtainable unless you buy out of state. At Sherwin-Williams we purchased 2 Tile-Clad kits that cost a pretty penny, but would be crucial in protecting Avocet and ourselves from moldy lockers. Our first item was crossed off our list and it was time to go to Home Depot where we had hoped to check off all the others.

The Las Vegas Home Depot was definitely well stocked in comparison to our many California Home Depots, meaning Chris was in heaven. We quickly located the outlawed products we were here to retrieve and loaded our flat card with Helmsman Spar Varnish, 8 large sheets of insulation, and Xylene, which was actually a consolation prize since Mineral Spirits was indefinitely out of stock. We learned from the Home Depot employees that if California no longer carries a product, it is likely Nevada will soon follow suit, not because of laws but because a majority of the warehouses they receive shipments from are in California… so we can plan on having to drive to Arizona next time. We finally had all we needed to finish our projects (and then some) which meant we could load up the truck and head home… but first a little detour. 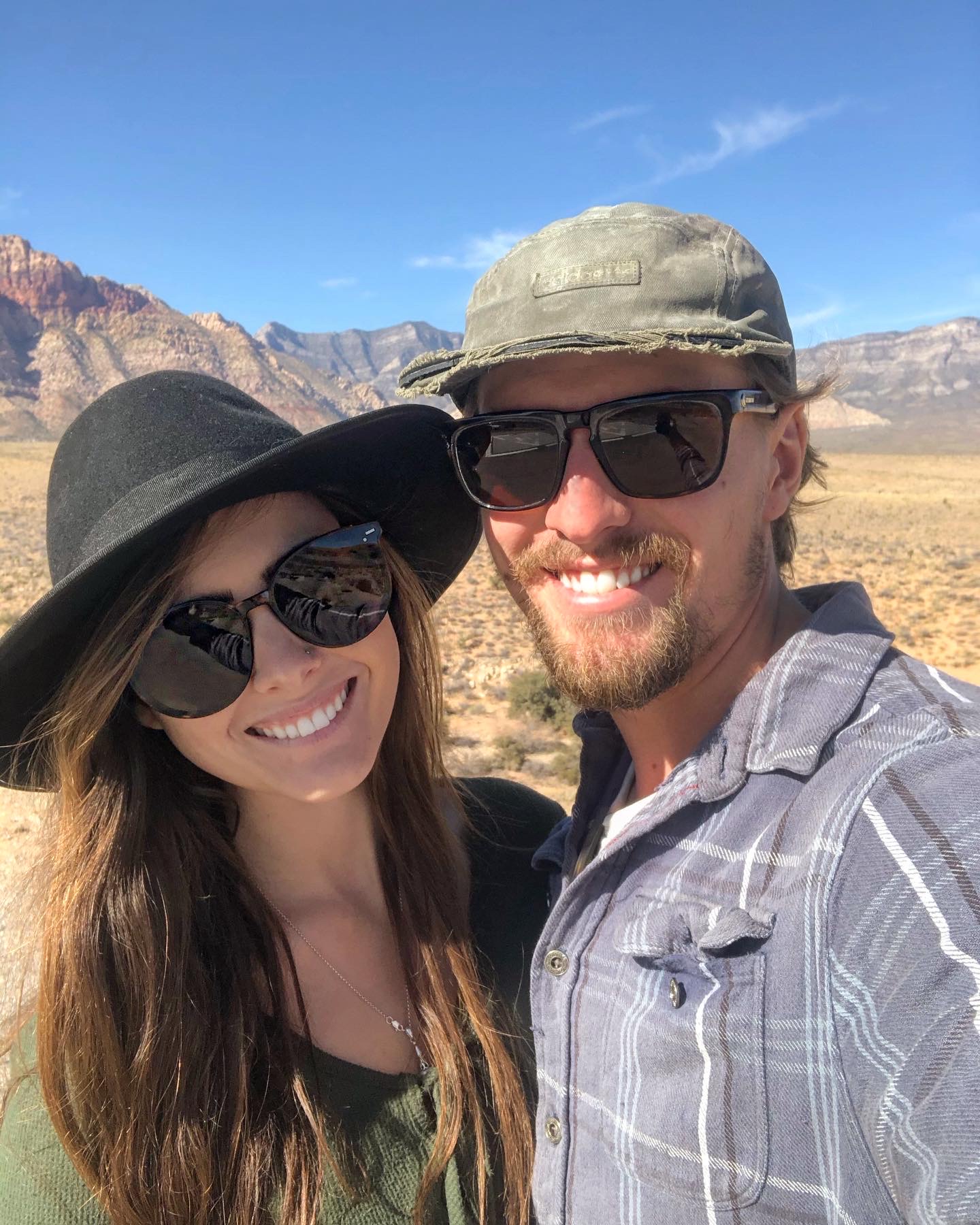 Nevada may seem like a desolate desert, but it is full of biodiversity and beautiful scenery. Red Rock Canyon National Conservation Area lies just outside of Las Vegas in Nevada’s Mojave Desert. The large national park and conservation land is known for geological features such as towering red sandstone peaks and the Keystone Thrust Fault, as well as Native American petroglyphs and historical buildings. Unfortunately to drive the scenic loop through the red rocks you had to have made reservations weeks ahead of time, which is a downside to spur of the moment adventures but Chris and I took it as an opportunity to get lost together and we stumbled upon a true gem.

Adjacent to the Red Rock Canyon National Conservation Area lies the beautiful Spring Mountain Ranch which has been used historically as a working ranch and a luxury retreat by a many owners, including German actress Vera Krupp and millionaire Howard Hughes. While exploring the historical spot today, visitors can learn about some of the oldest buildings in Nevada like an 1860s blacksmith shop and the Sandstone Cabin that was home to the founding family as well as the ranch house. We walked the short 1 mile loop trail, admiring the prickly pears and Arizona Ash grove that happens to be the only naturally growing ash grove in southern Nevada. Arizona Ash trees can grow to heights of 50 feet and have a diameter of 12 inches! 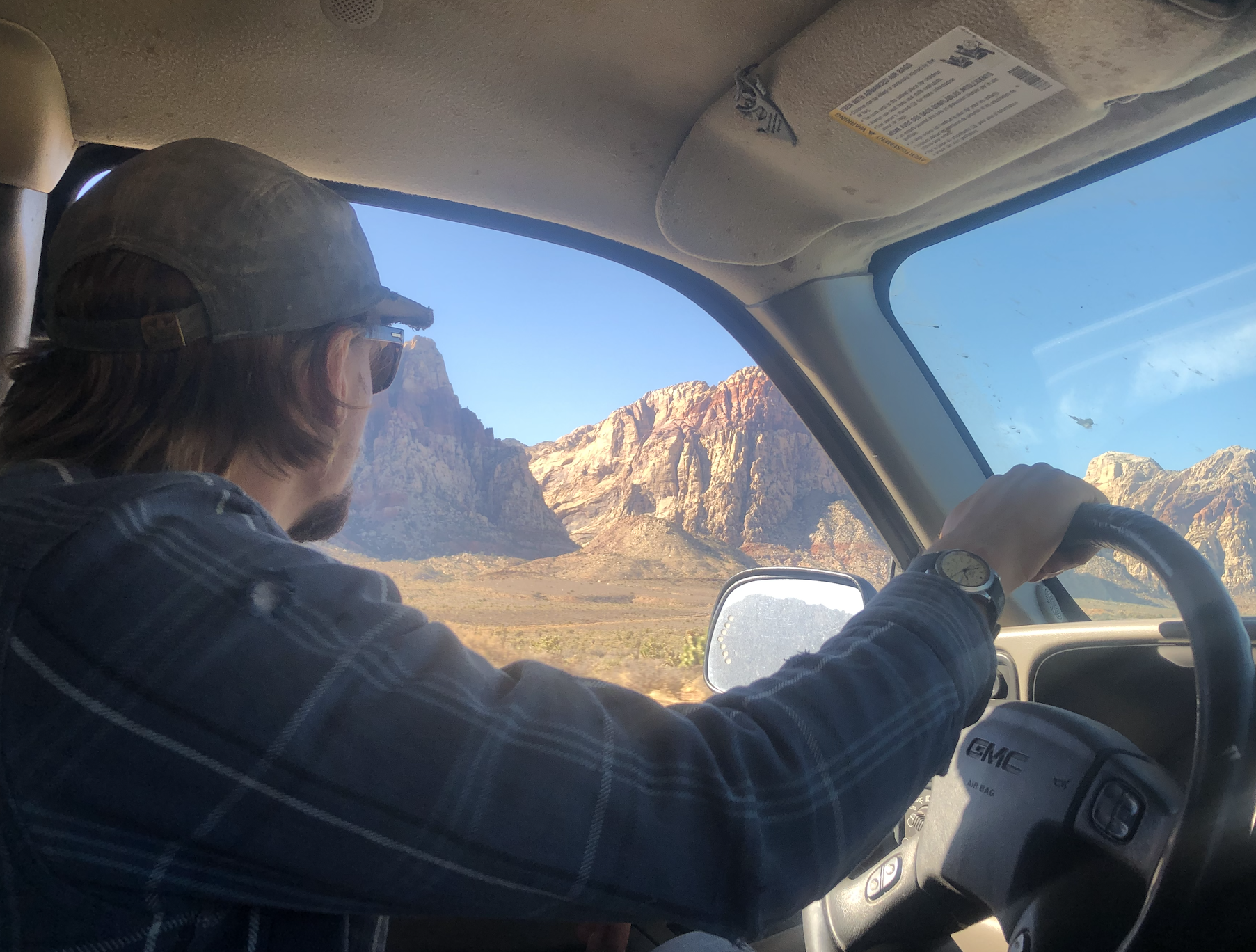 At 2:00 we took our places in our trusty truck, and headed West towards the coast. In due time we would be back on board Avocet, but for the time being we let classic rock blare through the trucks loved and abused speakers, singing at the top of our lungs and entertaining no one but ourselves as we cruised along the highway with a truck bed full of California Contraband, feeling like the spirit of one of my favorite authors.

In the words of the great Hunter S. Thompson “Every now and then when your life gets complicated and the weasels start closing in, the only cure is to load up on heinous chemicals and then drive like a bastard from Hollywood to Las Vegas … with the music at top volume and at least a pint of ether”… hold the ether, what we really needed was mineral spirits.

As always, thank you for coming along on our journey

Marissa, Chris, and Cleo the cat

Absolutely loving our time here on the Amalfi Coas

I’m just thinking about when Chris and Mitch wer

We inturupt our Italy photos to share the photos f

We waved goodbye to the northern lakes of Italy an

← Prev: Practical Gifts for Salty Sailors and Minimalists Next: New Kids on the Dock → 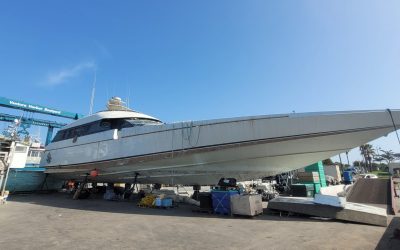 A Tale of Triumph and Sorrow By Marissa Neely   Ventura Harbor California is a seaside oasis filled with various... 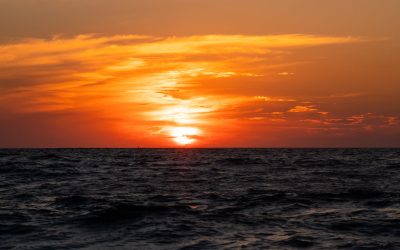 Hey friends. How are you? We have been dealing with a lot of emotions regarding the current state of the world and...

Chris and I were both born in February, his birthday falling on the 10th and mine the 14th making me none other than a...